The Antagonists made their yearly trip to Rehoboth Beach, Delaware last week, and we videotaped it, so you can be jealous all over again.

Posted by The Antagonist Movement at 5:33 PM No comments:

My family reunion in the great state of Rhode Island. from Ethan H. Minsker on Vimeo.

Posted by The Antagonist Movement at 11:52 AM No comments:

I am on "DEAD TOUR" in New Jersey at my friend's place following what is left of the Grateful Dead. ( Further featuring Bob Weir and Phil Lesh with a great fucking band) I am waiting for my "mellow" friend to pick me up for the next show.

My "pain in the ass" friend picked me up in New Jersey Friday night and told me a story about going to a massage parlor and getting a full body massage from a cute 35 year old asian lady....happy ending included. I have never paid for sex but I would not rule it out. ( MEN ! MEN! MEN!)

We stayed at his parents beach house in Long Beach Island on the Jersey shore. If you sit on the deck you can see the Atlantic Ocean. Friday night we sat on the deck drinking bud light and smoking pot and listening to the Grateful Dead on the Bose ipod dock. This was not the highlight of my trip but it was pretty good.

My friend has OCD and kept asking me if I had washed my hands. I said " they're not dirty, stop bugging me"....my friend is a Jewish pain in the ass.

Saturday we made our way to Philadelphia to see the first of the two shows. We stopped at a rest stop and I happened to pet a dog. I like to pet dogs. I especially like to pet a dog I have never pet before. My friend said "you are gonna have to wash your hands before getting back in my car, you dirty fuck". I washed my hands after petting the first dog and then pet another dog ( out of view of my friend) before I got back in his car!!!! I love dogs. I love to touch and pet dogs. This was not the highlight of my trip but made me very happy.

We had great seats for the show. Tenth row center. I had a garden burger before the show. Then I had a hit of LSD from 1968 for the show. It was very hot...it was reserved seating but the aisles were full. The people behind me were talking about a baseball score all night and I kept hearing things like "bottom of the 7th, top of the 8th, etc. I did not follow the World Cup but I think I would rather have Lebron James stick his big dick in my ass than pay attention to the world cup.

The band played a cover song made popular by the Dead called "I KNOW YOU RIDER". My pain in the ass friend and I danced like crazy teenagers and sang our asses off. At this point this may have been the highlight of my trip

During the second set the band played "Franklin's Tower" and we danced and sang harder than earlier. ( ROLL AWAY THE DEW....YOU BETTER ROLL AWAY THE DEW) I think THIS was the highlight of my trip

After the show we headed to the parking lot and had no trouble finding nitrous balloons, cold beer, baked goods made with marijuana, and new dogs to pet. My friend forget to tell my to wash my hands after petting the multiple stray dogs. There is nothing greater to me in the world than meeting a dog and petting that dog. I love dogs. My parents did not get me dog as a boy and when I asked for a dog they said " we will talk about it when you're older". When I got older they said " we'll talk about it when you're older" and when I was even older they said "you're going off to college, who is gonna take care of a dog??? NOT US!!" Of course not them...why would the old grumpy Jew want to take care of a sweet little dog?? Jews don't like pets. Pets are dirty to Jews. I am adopted and not like the rest of the Jews. I like dogs.

We drove back to my friend's beach house but got lost in downtown Philadelphia on the way. My friend (who is a high maintenance Jewish pain in the ass was cursing up a storm.) I was in the passenger's side and did not care if we were lost in downtown Philly or Haight Ashbury! ( I had a buzz like no other and was feeling no pain.) This is in the running for the highlight of my trip.!!!

We got back to the beach house and made ourselves comfortable on the deck for one more beer with the Atlantic Ocean in the background.

My friend said "Remember that massage and happy ending story I told you yesterday?" I said "yes". He said , well, I left a part of the story out." I said "Oh really? Why don't you fill me in?" he said "okay."

He continued " well , when the hot 35 year old Asian lady in the bikini bottom was jerking me off, I pulled down her bikini bottom and stuck my middle finger into her ass hole as I approached orgasm. After I came I pulled my finger out and put it in my mouth!!" This addition to the story was absolutely the highlight of my trip.

P.S. My friend DID wash his hands before he left the massage parlor.

One of our fabulous Antagonists is chasing the music world, and catching up to it mighty quickly. Witty, honest to a fault, and lyrically beautiful, Mystie is the hardest working woman in show biz. Oh, and she has awesome hair.

The Devil and the Deep Blue Sea by Just Another Folk Singer
Posted by The Antagonist Movement at 7:14 PM 1 comment:

Email ThisBlogThis!Share to TwitterShare to FacebookShare to Pinterest
Labels: Music

Thursday (tonight!) we've got Pinup Girls galore! Come on down to Niagara to see the attractive ladies of art. 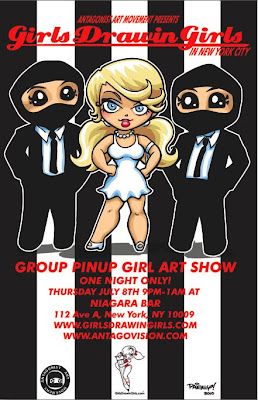 And of course, stop by on Monday for Alphabet City Soup! No Steve will be blowing your minds. And if you're lucky, they might take off their clothes. See the facebook event below!

NO STEVE AT NIAGARA!!
Posted by The Antagonist Movement at 10:11 AM No comments: