Short Changed at the Bowery Ballroom

On Saturday December 11 I went to the Bowery Ballroom to see Jesse Malin perform. I was on the main level (where the stage is) standing next to the bar in the back of the room. There was a female blonde bartender with a "fashionable pageboy haircut" serving drinks. I ordered a $5 Budweiser and gave her a twenty dollar bill. She gave me 5 singles back. I called her over and said " I gave you a twenty"....she nodded and then I said " and this is the change you gave me" ( as I showed her my 5 singles). She opened the register and said " You gave me a ten." I said " Okay, I'm sorry" and left her a dollar tip. I am 99% sure that I gave her a 20 dollar bill. I don't think that the fact that she opened the register and looked in really meant anything.( She was doing multiple transactions while mine was taking place.) I did not want to start trouble and ask for the manager because it was her word against mine. ( I assumed that the Bowery Ballroom would have taken the bartender's side over the customer's .) Should I mark my money in the future? Should I bring a flask into the Bowery Ballroom and not purchase alcohol? Should I loudly announce the denomination of money I am handing the bartender in the future? Was it an honest mistake or was I ripped off? My gut feeling tells me I was ripped off.
-Brother Mike Cohen Sunday December 11, 2010. NYC
Posted by The Antagonist Movement at 12:49 AM No comments:

The door opened and I looked up to see a figure with a giant head walk in. Orlando was flirting with a girl, and the guy stood in front of me. He had brass colored hair. His looks were plain. I pointed to Orlando, but he kept staring at me.

“If you want a drink, he’s the bartender,” I said annoyed, but he was still looking at me. Was this guy gay? Was he crusing me? Did he know me? Or maybe he wanted to fight.

“It’s Charlie. From DC,” he said. That was the bad part about working in a bar in New York City. At some point everyone you ever met would walk through. I flipped through the faces in my memory, stopping at Charlie’s. I had known him as long as Mary Jane and Baxter. Charlie was the guy who talked too much. Saying hello was like firing the pistol at the start of a race and his mouth would be off and running. Once you blocked out his rants, he was a sweet guy who had few friends.

He pulled out a stick of vanilla lip balm and applied it, making several trips around his mouth. “I was walking down the street and I saw this kid wearing a hat that had a patch of Baxter’s old band, so I asked the kid if he knew Baxter, he said he didn’t but that Baxter hung out at this bar, so I came over here and thought that it was you behind the bar, the last time I saw you I had just got back from LA, I had that cut, the half smile those gang bangers gave me, remember that?” I nodded since I thought he wanted acknowledgement that I was listening to him, but he didn’t even slowdown. “You can barely see it now, I have been living in New York for a few months, I moved in with these artists who live on a boat, they are sculptors and the boat is really great, they rent it out for parties, it’s off the pier down by the World Trade Center, it would make a great location, you should come down and see it sometime—”

My mind went numb with his words. How did he breathe? It was a constant flow without pauses, one long sentence from the start of his day till the end. I worked, cleaned, and moved away from him, but he kept talking even when I was out of range and couldn’t hear him.

Charlie was sitting at the other end of the bar. He leaned over to me. “I like how you handled that. No bullshit. And that’s just how--”

He held my glance, then looked away. Charlie’s girlfriend, a graphic designer, had died in the towers. She wasn’t supposed to be there that day, but she had a meeting in the North Tower. The meeting was scheduled for 10, but she and her colleagues had shown up early to go over some things and they’d all been caught when the first plane hit at 8:46. Ever since then, Charlie had talked his way through the sadness. I listened as much as I could, but I had my limits. I couldn’t spend my whole life playing therapist to him. And he couldn’t spend his whole life talking about it. He was my friend, but we all had to get on with things. He pulled out his lip balm and looked at it like a childhood blankie.

Posted by The Antagonist Movement at 3:14 PM No comments: 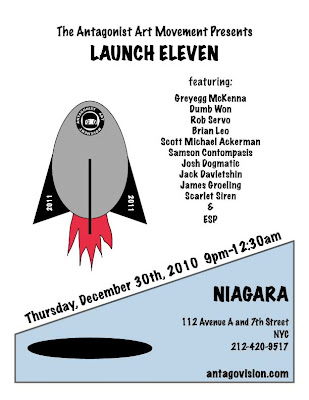 Posted by The Antagonist Movement at 3:13 PM No comments: 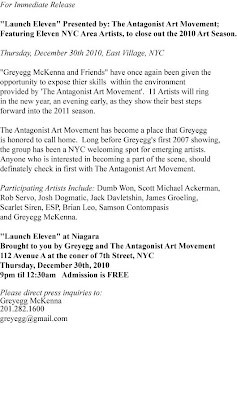 Posted by The Antagonist Movement at 3:09 PM No comments: 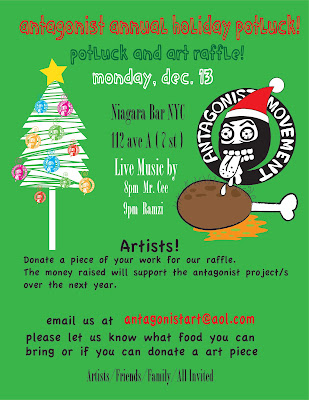 Posted by The Antagonist Movement at 11:01 AM No comments: