Posted by The Antagonist Movement at 9:14 AM No comments:


The focus of this project to collaborate with other artists and to create a visual dialogue using letter forms.


Posted by The Antagonist Movement at 7:35 AM No comments:

Posted by The Antagonist Movement at 11:29 AM No comments:

Psycho Moto fans! Our Family issue will be out soon (oh! so soon!) and that means we need fodder for the NEXT issue!

Some of you may already know the theme: NERD LIFE.

This is already shaping up to be one of our more popular themes, and space is limited, so if you want to get your nerdy, dorky, and completely geeky pieces of art into this then you better act faster than the Enterprise in hyperdrive! (I don’t watch Star Trek, was that a good comparison?)

To give you a little glimmer of the joy that will appear in the Nerd issue…here is a photo. 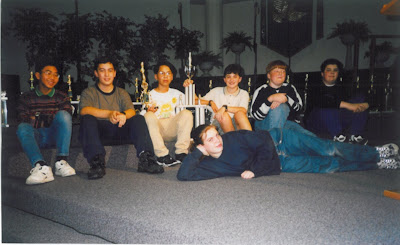 Speaking of my father, I had to ask him to send these photos (they were taken with a real camera, in like 1996). I also let him read the piece I wrote about chess (which will be in the Nerd Life issue!) and this was his response. You can see how clearly awesome he is, right?

Hi Marissa,
Yes, I found some embarrassing pictures, and you can thank Darlene Furler for that. Can you be sure she sees your zine? Like, do you have Adam on Facebook or something? In fact, how do I see it? Is it a website? I will send a few pictures by snail mail tomorrow morning if your Mom can't show me how to scan them tonight. And really, wouldn't we need a special scanner to do that? I've never noticed one around here. How can I be a Nerd if I don't know this stuff?
Yes, I dried some tears. I think of Zhu Zhu at the Queen's Gambit. (Remember the Queen's Gambit tournaments? We aimed to get girls in chess, and that tournament was very well attended). I think most of the boys were not cocky about playing girls. They were intimidated. You have to remember your power over teen-age boys. Remember Ina with her Goth style? I encouraged her to keep that up at the tournaments. And our clubs were a little United Nations too. South Africa. Iran. India. China. Ukraine. Thailand. Bulgaria. We had 'em all.
I got a kick out of your article, and I'd say you got it pretty right. For me, it was just an immense amount of fun. And what could make a father prouder of the job he's done than to learn that he has taught his daughter how to get free drinks?
Oh, you've got to show me how to read the zine so I can see what Sedona wrote.

To read my story, and many other hilarious, ridiculously nerdy stories (and to see some awesome nerd art, yeah!) you'll have to read the zine.

You can also be in it!! Send submissions to pmzsubmissions@gmail.com, or send us a note on facebook (Psycho Moto zine). Do it now! Promptly and immediately!

Posted by The Antagonist Movement at 5:24 PM No comments:

Have You Considered Crown Heights?